Tom Drivas, CEO of Appia said “Building on our cumulative knowledge, from historical geophysical, prospecting, and drilling programs in the 1970’s and 1980’s, and our 2020 prospecting/sampling experience at North Wollaston, this phase of geophysics has completed Appia’s needs for drillhole targeting. Presently, we are working on complete data integration and 3D model building to plan the next phase of detailed prospecting/sampling/geochemistry in 2023 for identifying new drill targets”.

The geophysical exploration activities on the North Wollaston property (Figure 1) were carried out from September 12th, 2021, to Jan 24th, 2022. Appia commissioned Geotech Ltd. to carry out a helicopter-borne gamma-ray spectrometry and VTEM geophysical survey. Appia acquired a total of 951 ln-km of VTEM data and 867 ln-km of radiometrics data within an area measuring 174 km2. Measurements included Vertical (Z) and Horizontal (X&Y) components of the EM fields. 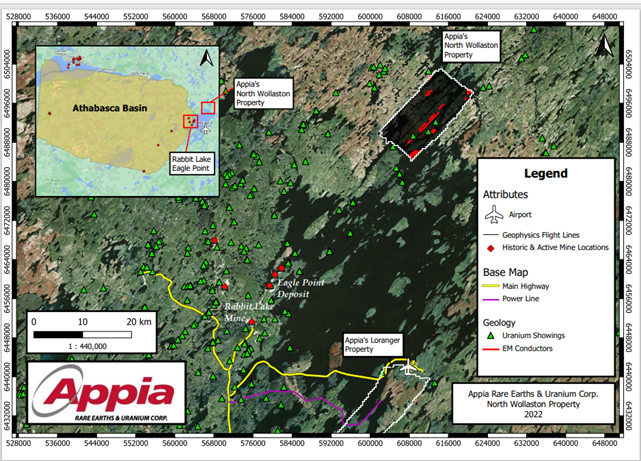 About the North Wollaston Project 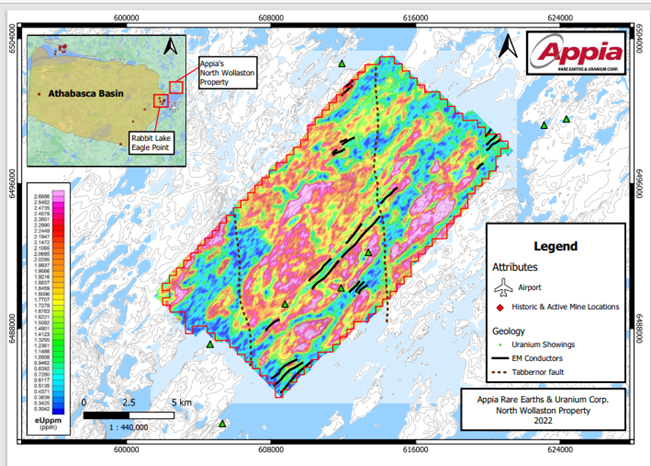 The property straddles the western Wollaston Domain and the Wollaston-Mudjatik Transition Zone (WMTZ) and extends ~80 km northeast to the Manitoba border. The Western Wollaston Domain and the WMTZ comprise multiple high-strain zones within reworked Archean and Paleoproterozoic rocks of the Hearne Subprovince. These reactivated deformation zones host most of the basement-hosted and unconformity-type uranium deposits across/along the prolific eastern Athabasca Basin.

There is an abundance of historic uranium anomalies on the property, as well as the right geological structures/geophysical EM conductors to focus fluids and heat for depositing economic mineralization. There also appear to be the non-conductive gravity-low intersection zones that are ideal for concentrating mineralization. Coincidence with identified radioactive boulder trains, uranium in soil profiles, and uranium in drill core from historical drilling provide confirmation of these interpreted drill targets.

Historic exploration (before Appia time) for uranium over the North Wollaston property has occurred over three separate time frames; from 1970, 1978 to 1980 and 1983 to 1984. Appia’s work commenced with a small prospecting/sampling program in 2020, followed up with the 2022 geophysics.

Appia is a Canadian publicly-listed company in the rare earth element and uranium sectors. The Company is currently focusing on delineating high-grade critical rare earth elements and gallium on the Alces Lake property, as well as exploring for high-grade uranium in the prolific Athabasca Basin on its Otherside, Loranger, North Wollaston, and Eastside properties.

The Alces Lake project is located in northern Saskatchewan, the same provincial jurisdiction that is developing a “first-of-its-kind” rare earth processing facility in Canada (currently under construction by the Saskatchewan Research Council and scheduled to become operational in early 2023). The Alces Lake project area is 35,682 hectares (88,173 acres) in size and is 100% owned by Appia.

The Alces Lake project encompasses some of the highest-grade total and critical* REEs and gallium mineralization in the world, hosted within several surface and near-surface monazite occurrences that remain open at depth and along strike.

* Critical rare earth elements are defined here as those that are in short-supply and high-demand for use in permanent magnets and modern electronic applications such as electric vehicles and wind turbines (i.e: neodymium (Nd), praseodymium (Pr), dysprosium (Dy) and terbium (Tb)).

All geophysical results were provided by Geotech Ltd.in Aurora, ON. All geophysical results reported herein have passed internal QA/QC review and compilation. The technical content in this news release was reviewed and approved by Dr. Irvine R. Annesley, P.Geo, a Qualified Person as defined by National Instrument 43-101.

The Company holds the surface rights to exploration for 110,997 hectares (274,280 acres) in Saskatchewan. The Company also has a 100% interest in 12,545 hectares (31,000 acres), with rare earth element and uranium deposits over five mineralized zones in the Elliot Lake Camp, Ontario.

Cautionary Note Regarding Forward-Looking Statements: This News Release contains forward-looking statements which are typically preceded by, followed by or including the words “believes”, “expects”, “anticipates”, “estimates”, “intends”, “plans” or similar expressions. Forward-looking statements are not a guarantee of future performance as they involve risks, uncertainties and assumptions. We do not intend and do not assume any obligation to update these forward- looking statements and shareholders are cautioned not to put undue reliance on such statements.

Neither the Canadian Securities Exchange nor its Market Regulator (as that term is defined in the policies of the CSE) accepts responsibility for the adequacy or accuracy of this release.